Specialities in the areal 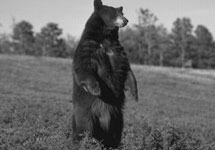 Zarnesti Bear Sanctuary Lies 23 miles west of Brasov BUT... you don't need to pay to see a bear or another wild dangerous animal - lynx, wolves, jackals....they are all wandering free in all forests around Romania, if they are hungry they attack no matter what....
I try to present objective facts, though....if you watch Tv-shows, I can clearly say that men got bigger mouses then women, talks are plenty, facts are few....
The goverment debates now a law to kill some of the beasts, but there are men with big mouses only (though the other thing must be big in a man, not the mouse) which oppose...I am pretty sure that they will reach no agreement, in this country nobody reaches an agreement; best is to act alone :)) All law which goes public for vote are never approved! They are extremely chaotic!

To tell you a story I heard in Prejmer fortress from the nice local guide overthere....back in 17 century, when a couple married - and she was definitively a virgin - & they do not get along in bed, they were not allowed to separate - they were forced to share a prison cell to eat with the same spoon untill they get back together.

I am giving you some facts about the wild predators from the forests, why I presume they are still alive and protected, though forests are demolished outrageously with no pity please click writing in this big red box